(the following story, by Rev. Erik Alsgaard of The Baltimore-Washington Conference of The United Methodist Church, is reprinted with permission. https://www.bwcumc.org/news-and-views/webinar-examines-white-supremacys-roots-of-american-christianity/)

The history of American Christianity is so intertwined with white supremacy that most people don’t know it exists, even if they benefit from it every day. It’s like water to a fish.

This fact was at the heart of a webinar Sept. 17, presented by Wesley Theological Seminary’s Center for Public Theology. Three experts served on the virtual panel: Dr. Robert Jones, author of "White Too Long: The Legacy of White Supremacy in American Christianity," and Founder, PRRI; Dr. Obery Hendricks, Adjunct Professor of Religion at Columbia University and author of “The Politics of Jesus;” and Dr. Kris Norris, author of "Witnessing Whiteness" and Professor at Virginia Theological Seminary.

Dr. Lorena M. Parrish, Director of Wesley's Community Engagement Institute and Wesley Associate Professor of Urban Ministries, served as moderator for the webinar, and began by asking the panel to define white supremacy.

“The belief in the superiority and supremacy of whites… (has been) the explicit teaching of most white Christian churches” for the last four centuries, Jones said.

For Jones, using the term “white supremacy” is itself important because, he said, for years people employed euphemisms to dance around the issue.

“But the rhetorical danger of taking it head-on,” Jones said, “is that many more whites easily dismiss it because they say, ‘I have nothing to do with that.’ (They think) that white supremacy is about people in white sheets and burning crosses in people’s yards, and that’s not me or anyone I know.”

However, Jones was quick to point out that white supremacy, properly understood, is that a person is “supportive of a set of structures and the way that society is organized to give value and opportunities to people.” He cited criminal justice sentencing and redlining as just two examples of those societal structures.

White supremacy is more than an attitude or an ideology, Norris said, because it is a system that surrounds us. 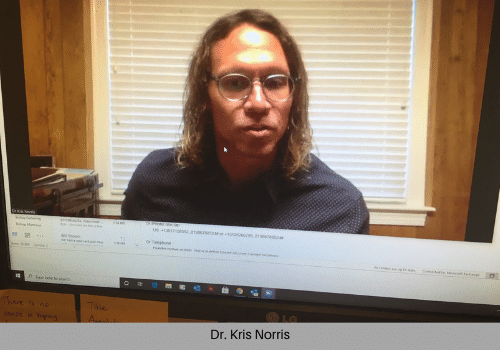 “It’s a principality and power,” Norris said. “It moves within and without and among and beyond all of us. It impacts every single practice and belief in the church. We’re all implicated; every single white person benefits and has some privilege from 400 years of racial oppression that’s happened in this country.”

Hendricks noted that white supremacy has components of Libertarian individuality embedded in it because it offers the idea that no one has the responsibility to help another person unless she/he chooses to. This idea, he said, is directly in opposition to Matthew 25.

“The way to stay out of hell,” Hendricks said, “is to help other people. You have to.”

What make white supremacy’s ties to American Christianity so insidious, Jones said, is that it has had the power to make itself invisible. It has been around so long that people have developed “moral blinders” to it, he said.

“We have to start with telling ‘truer’ stories about ourselves,” Jones said. “Ask yourself, ‘How does race even show up for me?’”

One of those stories Jones shared on the webinar was about his grandfather, who served as a deacon at the Baptist Church where Jones grew up. His grandfather’s job, he said, was stand outside the church every Sunday to make sure no African Americans came in.

Another question Jones suggests church members ask: “Why is this church located where it is?”

Jones noted, for example, a large church in Richmond, Virginia, that moved decades ago from its downtown location to be among Confederate statues and monuments along what is now known as “Monument Row.” They wanted to show their support for the Confederacy. Monument Avenue once contained statues to Confederate Generals Stonewall Jackson, J.E.B. Stuart, and others, before being taken down this past summer.

Even though there is some progress, Hendricks said that most pastors and churches “are politically backward.” 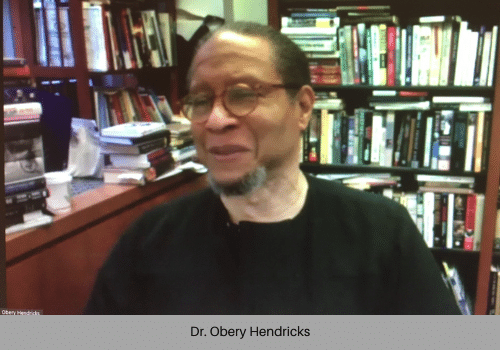 “Pastors are not as informed as they could be,” Hendricks said by way of explanation. “Most pastors in this country are so focused on theological matters that they aren’t really up on the politics of lived realities. Theological education does a poor job of preparing pastors to be socially aware.”

Hendricks suggested that pastors read a newspaper or two every day and consume their news from a variety of sources. “Pastors have a responsibility of knowing what is going on in society,” he said.

The white Jesus image is another problem that needs to be fixed, Jones said. He and the other panelists spoke about the image of a white Jesus often found in local churches, painted by Warner Salman.

“That image has ballooned into being the image of Jesus,” Jones said. “But if you take the image of Jesus and represent him as a Middle-eastern Jewish man, it would really change the way white people think about their personal relationship with Jesus.”

Would white Christians be able to sing about letting Jesus “into my heart” with this image in their head, Jones asked.

“Letting a brown Middle-eastern Jewish man ‘into your heart’ is a really different thing than letting a Swedish Jesus who looks like you,” he said.

Parrish, the moderator, asked the panelists for suggestions on how to dismantle the structures and systems of white supremacy in American Christianity.

“The infrastructures themselves reward white supremacist theology,” she said, “even when the leaders inside those structures claim to want the opposite. How, then, do we dismantle and confront this?”

The answer, they said, was not easy, but one that had to be done.

“It goes all the way back and all the way down,” said Jones. “This is not an ‘around the margins’ kind of thing. It’s like DNA; it’s in every cell of white Christian churches.”

To help make his point, Jones pointed to research data from his company, PRRI (Public Religion Research Institute), and published in his recent book, “White Too Long.”

In the book, Jones offers a “Racism Index,” 15 questions about structural racism. The picture that emerges from the data is shocking.

“White Christians of all kinds – mainline, Catholic, and evangelical – are unwilling to see systemic racism,” he said. “On this scale, white evangelicals score 8 out of 10, with 10 holding the most racist views. But white mainline Protestants – the National Council of Churches crowd – score 7 out of 10, as do white Catholics.” African Americans, he said, score 2.

But in a result that shocked Jones and indicts white Christian churches, white people who are unaffiliated with any church scored 4.

In other words, Jones said, “take your average white person and add Christianity; they move further away from the views of African Americans; … they essentially become more racist.”

With one exception, attendance at worship doesn’t change things, Jones added. “Those who attend less and those who attend more hold just as racist views,” he said.

“What I’ve been asking white Christians not to do,” said Jones, “is to ask African Americans for reconciliation. I think it’s a mistake. It’s cheap grace; it’s a shortcut. I think what we have to do is stay committed to the work … of justice and repair and repentance. If we do that long enough, I’m pretty sure our African American brothers and sisters will tell us when we’re reconciled.”

The Center for Public Theology (CPT) at Wesley Theological Seminary, part of the Community Engagement Institute, offers classes and certificate and degree specializations in public theology - where faith and politics intersect. CPT also holds public events and webinars that highlights topics in public theology such as "White Supremacy and American Christianity." Email publictheology@wesleyseminary.edu to be added to a mailing list of upcoming events.
Interested in pursuing studies in this area? Wesley is currently accepting applications for Master of Divinity, Master of Theological Study and Master of Arts programs, as well as our Doctor of Ministry degree programs.